Between July 2017 and June 2019, over 38,000 Nevadans had their driver’s licenses suspended because they couldn’t afford to pay court fines and fees. Without a license, many Nevadans lose the ability to work, care for their children and access basic needs. In addition to losing the freedom to drive, Nevadans who can’t pay fines and fees face being reported to credit agencies, lien/civil judgments, “attachment or garnishment of property, wages or other money,” and incarceration. Courts can also issue arrest warrants for all unpaid traffic tickets, and then charge an additional warrant fees and late fees. Learn more.

People who are unable to pay traffic fines for minor violations such as speeding or driving with a broken tail light can be arrested and even incarcerated. Nevada’s Justice and Municipal Courts have issued hundreds of thousands of arrest warrants over the years.  When the pandemic forced courts to close in March last year, 270,000 traffic warrants were outstanding in the Las Vegas Justice Court alone. In her latest OP-ED, FFJC’s Leisa Moseley outlines the serious harms caused by traffic warrants. 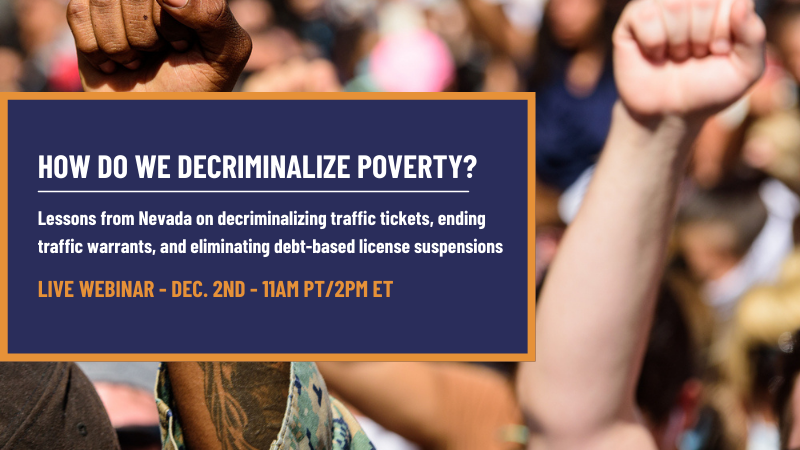 Join FFJC along with Assemblymember Rochelle Nyugen and Americans for Prosperity’s Marcos Lopez, as we share our on-the-ground lessons, legislative strategies and hopes for future reforms. This live Q&A and webinar will give you the opportunity to hear how Nevada became the first state in 30 years to decriminalize traffic; learn how your state can advance the work of decriminalizing poverty; and talk to the diverse group of advocates who worked on Nevada’s legislation in 2021. Register here.

On August 2nd, FFJC and the Clark County Black Caucus (CCBC) hosted the Las Vegas premiere of Racially Charged: America’s Misdemeanor Problem. The documentary explores the historical roots of the U.S. misdemeanor system and its devastating impacts today. The screening was followed by a discussion with FFJC’s Leisa Moseley, CCBC’s Yyette Williams, Judge Belinda Harris, UNLV Professor Eve Hanan, and Harvard Law Professor Alexandra Natapoff, the author of the book that inspired the documentary. Read the full review in the Nevada Independent.

Clarifies that community service credits can be applied toward outstanding fines and fees, and provides that community service hours will be credited against debt at a rate of $10 per hour or the state’s minimum wage, whichever is higher. Nevada’s minimum wage is set to increase to $12 per hour by 2024. The bill also provides that any fine or fee not collected within 8 years is deemed “uncollectible.” Read more.

Help us create a fair justice system for everyone.

Do you or your organization want to join thousands of Nevadans in the fight for a fair justice system? Contact Nevada State Director, Leisa Moseley, at lmoseley@ffjc.us.